Importing Parts Compatibilities for US Motorcycles

By using the 'Bulk Import' feature you can quickly create compatibility lists for new or existing profiles, cutting down the time it takes in listing to eBay. Importing of multiple compatibilities is done through two special 'relationship' fields in your import file. An example import is shown below.

The relationship_details field allows you to define values for Year, Make, Model, Submodel, Notes and ePID. Information is entered by using a field and value pair separated by the equals sign, i.e., <field>=<value>. Multiple pairs are seperated by using the pipe character, e.g., Year=2012|Make=Kawasaki|Model=KLX.

The minimum required fields for describing a compatibility is either Year, Make and Model or ePID.

The year field can be a single year or a date range when using the dash character.

The system will match multiple vehicles for the required fields Year, Make and Model. Vehicles that do not exist for the specified years will not be included.
E.g. The compatibility Year=2000-2011|Make=Harley-Davidson|Model=Road King will be expanded into the following compatibility list. 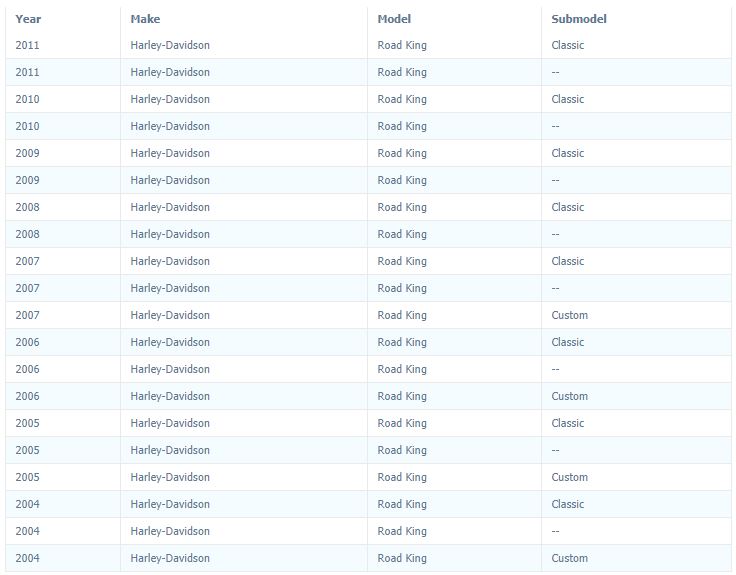 The import will accept an eBay Product ID (ePID) value which will be matched against a single vehicle. E.g. The compatibility ePID=110785266 will produce the following compatibility list.

A complete list of the vehicles supported by eBay can be downloaded from the eBay site here.

Was this article helpful?

Thank you for your feedback

Sorry! We couldn't be helpful

Thank you for your feedback

We appreciate your effort and will try to fix the article

Articles in this folder -